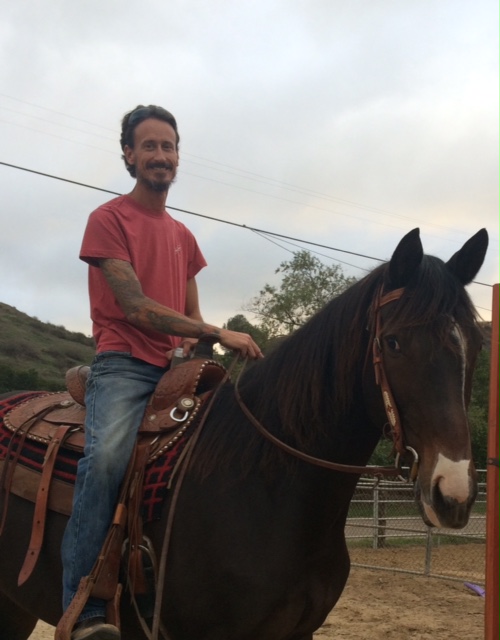 who is Mr. mike moore?

I met Mr. Mike about a year ago at the ranch where I board my horses, and my dad and him became fast friends. I quickly noticed that he was an honest, hard working and quick wit man. He was always quick to offer a helping hand and useful advice; he came across as a wise man. I would listen to my dad and Mr. Mikes conversations for hours; it would range from politics to favorite past times to favorite meals. Listening to their conversations I learned that Mr. Mike has tons of life experience and isn't afraid hard work; he has had many careers and life struggles. So being apart of the Humans of South Bay Project I knew I wanted to interview him, because he has seen and been apart of American history and he deserves to be remembered

“That's the balance between good and evil. We got both sides; everybody's got that in their personality and you got it in life.”~Mike Moore

I grew up in Nebraska in the panhandle. Born in Gordon, small town, same place my dad was born. Just outside were my family had our ranch growing up. My first job was when I was 13 I worked on a ranch for the whole summer. It was awesome I had a whole ranch house to myself. I would work from 3 in the morning till dark.
I did that for 2 summers only went home on the weekend to race motocross. My next career was in the Navy. My daughter Caitlyn was on the way and I wanted to provide for her, so enlisted in the Navy. Went to San Diego in 1993 and never left here. I was in for 6 years as a hospital  advance core-man, laboratory analyst. Ran laboratory for 3rd shift at the Balboa Naval Hospital, I worked in every aspect. After that I began painting, I then painted professionally for a number of years. Then I got hired on by the Union Pacific Railroad as a dispatcher. My dad just retired from the union pacific.  I ran the L.A. Basin, it is only 90 miles of track but it’s the busiest section of railroad in the Union Pacific. I had more trains per mile than anyone else in the U.P. After that then I began to work in rebar, doing construction really large projects. All over from San Jose to San Diego. For seven and a half years, I was a safety officer for them also. Drove a lot trucks did over a million miles in driving.  As a safety officer I would hit at least three jobs a day ranging from Orange County, to San Bernadine, to Imperial County and to LA”
After that I started to work in masonry, I do a lot of flat work , driveways sidewalks, I also do a lot of artistic stuff with bricks, and um stoneveners, rocks, walls,  trimmings. It’s cool. I enjoy it because you get to see your work as you go along, so I get instant gratification from completion.”
I am most proud of my daughter, without a doubt. She is awesome.
​She's in college right now she will finish her associates in spring in interior design and finish her bachelors in business management and its um awesome. She's the apple of my eye.
My other side;
My first tattoo is the tramp stamp on my lower back, got it because it was very popular at the time, fresh in the Navy and 20 years old. It symbolizes yin and yang, balance. I have always been attracted to art, I love to draw and what better canvas than skin?
I’m into symbology a lot, so then my sleeve started off with the nautical star on my wrist for the love of the ocean. And then I have the Sacred Heart, I love religious art a lot, like the Virgin de Guadalupe. It reminds me of my grandma. I also have Pala for the surfing goddess. On my upper arm I have the devil sitting in the horse shoe because it is an old irish folktale about never leaving your horseshoe facing up because it gives the devil a place to rest. Then my shoulder cap has 619 for my area code. On the inside of my arm I have the scorpio star constellation, my mom is a scorpio. The colors and art consist of hots and colds, good and evil; it represents balance.